This question is for testing whether you are a human visitor and to prevent automated spam submissions.

Skip to main content. Guidelines for Nomination Include: Any retail store established in business for at least two years is eligible to be nominated. Anyone — retailers, professionals, fans — may place a name in nomination. A panel of industry judges selects a group of finalists to be subjected to an in-depth examination based on the award criteria. Previous winners are not eligible for nomination. Criteria for Judging Include: Support of a wide variety of innovative material. Working to stay informed on retailing as well as on the comics field. Community activity.

Promoting comics to the community; maintaining relationships with schools and libraries; keeping active in social, business, and arts community organizations. Quality of store image. I like to sell prints rather than originals.

Hi there - Welcome to this Kickstarter,

I just do one at a time. I had also thought that until fairly recently - maybe a couple of years ago, I think. Did you have a hiatus from making comics, and, if so, why? What did you do instead?

CR: I did stop cartooning for a long while. I think I stopped in about when I decided that making films might be easier. So I made that Mauretania film Hunters of the Sun. It took ages and was really expensive and most of the work was in administration and planning. Not much percentage of creativity at all.

Please see Part One of this series here. The headmistress said, quite conversationally, that she had seen the arch on the way from the school, and remarked that she had often thought that the ordinary buildings that the people had been used to seeing would one day just appear as generators for the fantastic visions they saw nowadays.

The scene shows, in a large panel, Robert staring up at a gleaming archway above the road. What is going on?


Robert is back at the school at the end of the first story, but, as the second tale begins, he and the headmistress are together again, exploring a bombed out section of town. That understanding had turned to love. She disappears mysteriously. There, he finds Catherine, buried, bleeding, and probably dead. One man insists Catherine had moved away over a year ago. Robert returns to the bombed-out side of town, only to find much of it has been flattened by huge bulldozers. Soon, however, he finds the entrance to a maze of underground, cement-walled tunnels, and he explores them.

He discovers a chair that faces a concrete wall, and sits in it. An image of Catherine appears on the wall, and Robert heads back out of the tunnels to find the real woman sleeping by the waterfall. 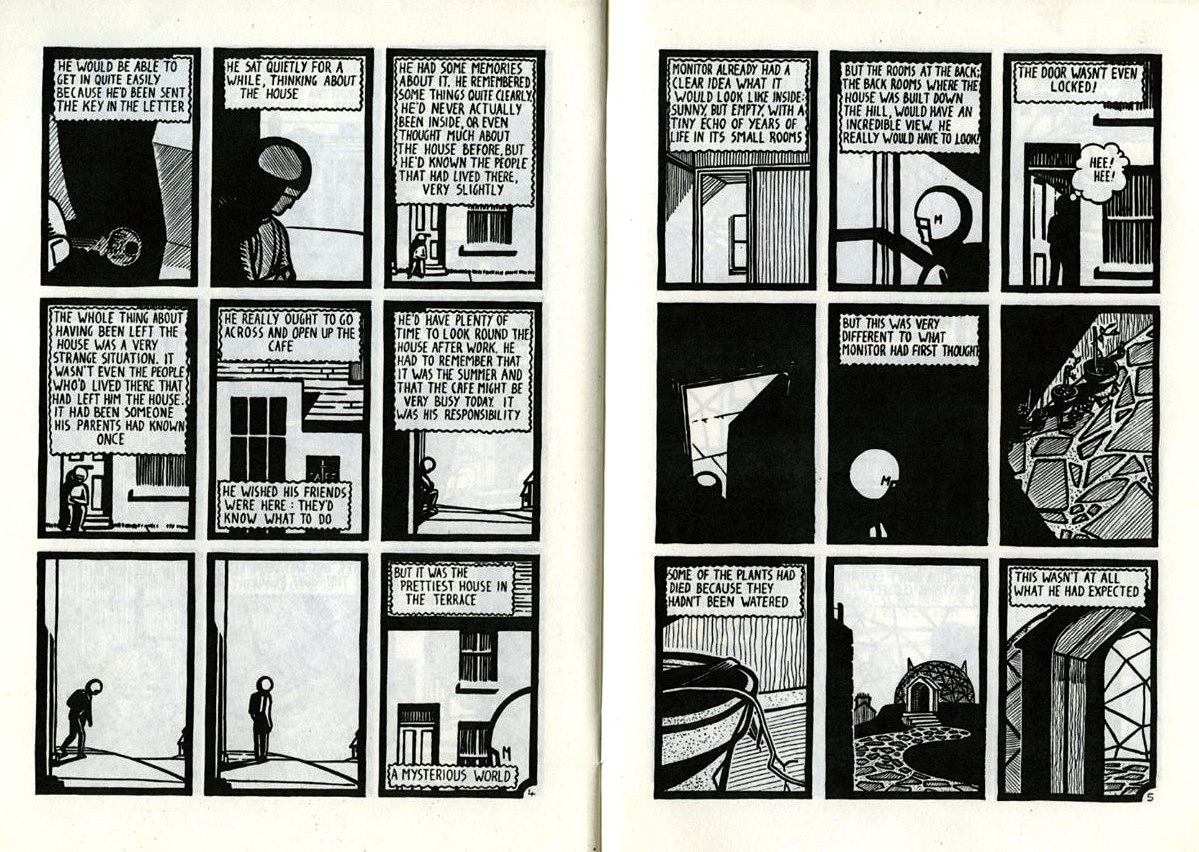 They exit the tunnel once, but Cwiss ambushes them, hitting Catherine over the head and shooting Robert. Somehow, they enter a tunnel again, but they emerge and are shot by a rat-headed creature. After a black panel, a series of panels shows what appears to be the wedding of a now adult Robert and Catherine in a futuristic city, complete with musical notes filling the sky.

What could all of this mean? On the other hand, the two do seem to want to protect each other. Sometimes he wants to kill Catherine, and other times, he merely seems to want to pit Robert and Catherine against each other, or to separate them. Underneath are featureless tunnels, from which persons can apparently emerge at different spots in space and time. This is one of those newer stories from Some of his backgrounds and pictures of vehicles retain the sketchy, scratchy look of his earlier works, but the figures became blockier and simplified, and he uses glow effects and highlights in some places.

From which mysterious agency? And how can that agency possibly know? Or is that a broader statement on humanity — of a desire or tendency to leave behind old ways … village, prophecies, our individual or collective pasts high school for some wild future? Is the character tired of existing in a real world, or the world of Mauretania, which is at least remotely like ours?

I am not truly sure, but what I do know is that, like Monitor, I will think about and revisit it for some time. For further reading:. You can also get these and other works through Amazon. Next up, a short interview with Chris Reynolds! I read and love comics - comic strips, graphic novels, and, most of all, comic books.

I want to make them. I can't stop thinking about them a lot of the time. I obsessively search for the next comic that will "jazz" me up. And I'm a writer. I used to review minicomics here: miniskinni. Anyhow, without turning this into too long of a post, I wanted to get this new blog up and running by stating my intent. Here 'tis: I figured that, to start with, I would review my personal Top Cartoonists Likely going to go for ones who are less well known than mainstream. I want to look at some of their work in an article format , explain why I like them and what I like about them, and, if I can get lucky enough to indulge their patience, include a short interview with them.

I don't want to make any big promises that I'll keep to some schedule or go much beyond my original "mission" comic book "evangelism" , but I sure hope to "preach" a lot more here about comics So that's my statement of purpose kinda First subject up should be Chris Reynolds, creator of Mauretania Comics. In a week or so, I hope! Labels: exposition , general , general comics talk , intro. Subscribe to: Posts Atom.